Next
Join our obituary notification email list
All Obituaries

This business is the outgrowth of the partnership formed by Frank Stewart and Frank Burr in Bowersville, Ohio in 1898.Mr. Burr and his family moved from Bowersville to Jamestown in 1917 to enlarge their operation. The funeral parlor was located in the Hatch Building for several years before moving to the Burr residence at 29 West Washington Street.

Around 1915 the Stewart and Burr Funeral Home purchased and operated the first motorized hearse in Greene County. Since this was the only one, for a time, many area funeral directors rented the vehicle for their services.

In August of 1937, Jeff Powers', father, Max, of Christiansburg, became a partner in the firm.Both Mr. Burr and Mr. Stewart died in 1941. At the time of his death Mr. Burr held Number 7A, the oldest embalmers license in the state of Ohio. Mr. Stewart’s license was 52A. Both licenses had been issued in 1902. Roy L. Powers joined his son,Max, as a partner in January 1942, but the business continued under the name of Stewart, Burr and Powers until November 1947 when it was moved to its present location. The name was then changed to Powers Funeral Home. Roy Powers’ death occurred in 1959.

In September, 1965 Jeff Powers joined his father, Max, with the firm. In 1982 Jeff Powers purchased the Funeral Home from his father and continues to provide caring service to Jamestown and surrounding communities. Max Powers passed away in 1999.

In 2003, Gretchen L Kell joined the firm. She serves as Funeral Director and Embalmer.

On January 1, 2015, Jeff Powers, after 50 years in the Funeral Service, retired to spend time with his family. The business was sold to Gretchen L Kell, who now serves the community as owner of the Funeral Home. 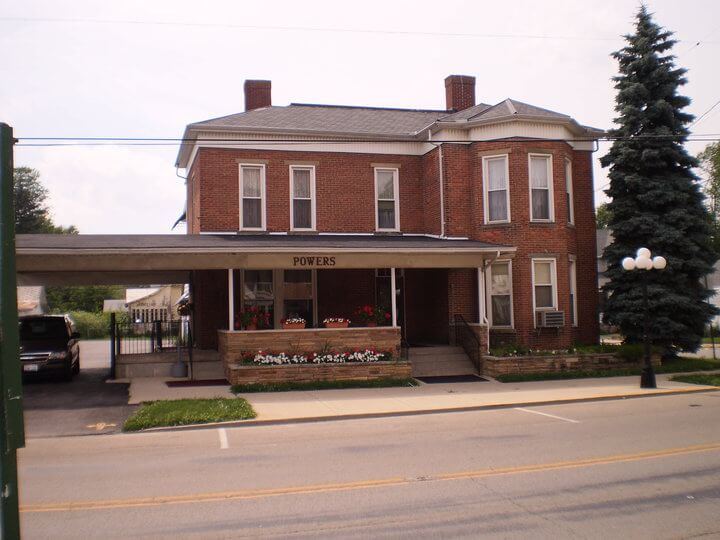